Best known for her roles on stage and screens, Haitian-born actress Djennie Laguerre immigrated to Canada at the age of 4, and has since charmed audiences with her acting, dancing and storytelling skills. She nurtured her gifts by attending De La Salle High School (Visual arts and Theatre) and studying Theatre and French literature at University of Ottawa. What really affirmed her future as an actor and storyteller was being accepted into the prestigious Stella Adler Acting Conservatory in New York. After two years in school, Djennie explored her craft further by performing in small but popular theatre shows in Manhattan and Harlem. But after September 11th, it’s in Toronto, Canada that Djennie’s professional stage and screen acting career took off. As a bilingual multifaceted artist, she was able to shine and expand her acting opportunities. 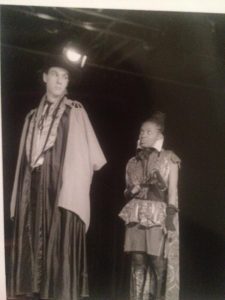 Since the summer of 2008 Djennie has added playwright to her arc by writing and performing in her own solo show Rendez-vous with Home the French version Rendez-vous Lakay Presented at following Theatre and storytelling festivals; Le festival Le Loup de Lafontaine / Festival des Contes Nomades at the NAC/Théâtre français de Toronto/ MAI / *SummerWorks Festival. *She is the recipient of the SummerWorks Spotlight Award 2008 for Rendez-vous with Home. Djennie is also a member of the collective (3 writers) creation Les Héritières de Toto B. The collective has just finished writing and performing their own play Espoir/Espwa in February 2016 at Théâtre français de Toronto.

To Come: Due to the success of the production Espoir/Espwa, the Théâtre français de Toronto is preparing a National and International tour for the near future. Djennie presently is writing Rendez-Vous with Home Deux. The first time the storyteller brought her public to a funeral in Haiti, this time, the audience is invited to a wedding in Haiti!

A Teaching Artist for the Ontario Arts Council for 11 years and for Young People’s Theatre (YPT) for 2 years. Djennie is proud to be creating dance, movement and theatre pieces with students (1-12) inspired by the themes of community, anti-violence, environment, hope and love.

In addition to her busy schedule as an actress, Djennie’s been inspired by motherhood to Tour schools with her own style of Afro-Haitian storytelling. She is preparing with excitement her next School and Library children tour with her show named “Madame Great Adventures!”(2017-18). Until then your children can enjoy Djennie’s “joie de vivre” as Madame Bonheur/ Miss Happiness on MiniTFO’s television and Youtube channels.